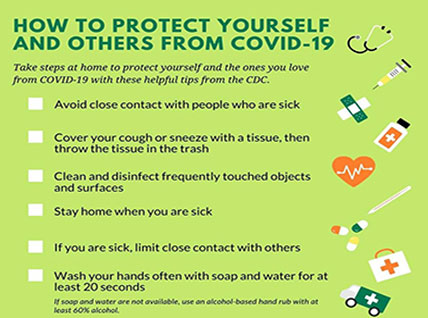 “The biggest thing we as a community should do is stay home if you’re sick,” said Dr. Scott Rens, a family physician with Sioux Center Health. “The danger in this virus is that it’s jumped from spreading from more than just close contact, there’s more of a community spread.”

That’s being seen in the states of New York, Washington and California.

Rens said close contact means standing within 6 feet of a person for at least 10 minutes.

“The biggest thing is to self isolate if you’re sick,” he said. “If you had contact with a known person how has COVID-19, recommendation is to isolate for two weeks as the incubation period is thought to be two to 14 days following exposure, with most cases occurring approximately four to five days after exposure. Though in a conference call this morning, it was indicated that may even be extending beyond the 14 days.”

Rens said he has a daily conference call at noon with other physicians in the Avera network on his calendar for the foreseeable future to stay up-to-date with changes.

Part of that includes talking with hospitals in Orange City, Rock Valley and Hawarden so that the four Sioux County hospitals can respond in the same way to cases that will arrive.

“This is definitetly different form the flu,” Rens said. “It’s in a different category. Part of what makes the coronavirus dangerous is that it’s a new strain so nobody had any immunity to it. There are about four coronaviruses that normally spread in a season that can cause the typical cough, cold, congestion type of things. This one seems to be a bit more virulent — it’s a stronger nastier bug if you will that tends to cause more severe disease in certain populations.”

There’s spectrum of illness severity, Rens said. Most infections are not severe, particularly in those ages 30-70

Specifically, in a report from the Chinese Center for Disease Control and Prevention that included approximately 44,500 confirmed infections with an estimation of disease severity:

“What we’re seeing in other countries is that the younger, healthier people tend to be less server,” Rens said. “We’re tending to see most of the deaths in those who are older than 70 or those who have other significant health problems — they’re battling cancer and are on immunosuppressant drugs, have diabetes or underlying lung diseases.”

Rens said for those who think they’re healthy, wash your hands. It’s best to do it under warm water with soap for at least 30 seconds. If you don’t have an option to wash your hands, using a hand sanitizer with above 60 percent alcohol is an alternate option.

“Try not to touch anything and put hands to mouth, nose and eyes, too,” he said. “Most of us will be just fine but we want to serious this global health problem and support efforts to slow the spread of illness because we need all the time we can get to prepare and cycle ill patients.

If an area resident suspects they have the coronavirus, Sioux Center Health recommends that person call the hospital first at 712-722-1271 as, if they need to come it, that person will be given instructions of a less public access into the emergency room area to use in order for the hospital to isolate and potentially limit the spread of the virus.

The hospital is currently reviewing ways in which it will test for the virus when cases arise.

“The biggest thing we want to do is keep the disease from spiking,” Rens said. “It may very well be that instead of having a four-week outbreak where we have 1,000 people sick, by trying to slow the spread we’ll still have 1000 people sick but it may take three to four months for it happen, and not be as taxing on the health care services.

Dordt University in Sioux Center announced Friday, March 13, it will extend spring break by one week and then hold only online courses the next three weeks due to concerns about coronavirus.

Although courses originally were scheduled to resume Tuesday, March 17, they now will begin Monday, March 23. However, courses will be held online only until Monday, April 13, when Dordt officials currently anticipate that in-person classes will resume.

A decision regarding this possibility will be made and communicated on or before April 3.

During this time, offices will remain open and campus operations will continue in support of its students.

Area churches, such as Bethel Christian Reformed Church in Sioux Center, are completely eliminating interpersonal physical contact pre-service and post-service greeting and mutual greeting. Yet morning services are still being held as of Friday, March 13.

The church proactively installed hand sanitizer dispensers at the entrances and exits of worship spaces and encourage the use of them in previous years but also anticipates placing additional hand sanitizer bottles in various spaces in the weeks to come.

“We take these steps as a way to care for our most vulnerable members as well as a way to love the neighbors in our broader community by seeking to prevent the spread of disease and/or unnecessary quarantine of our membership if coronavirus appears in our community,” said the Rev. John Lee, Bethel’s lead pastor.

“At the same time, God invites us to respond to the anxiety of this situation without fear but rather with the deep trust and creative compassion that comes from knowing the Lord to whom we belong, body and soul, in life and in death. God is also calling us to prayer. Let’s be in prayer especially for those at high risk and those already affected by this disease, including those whose business and farms have been affected by falling prices and disruptions. God is on the throne. Whether together on Sunday or at home by your computer, let’s worship Him.”