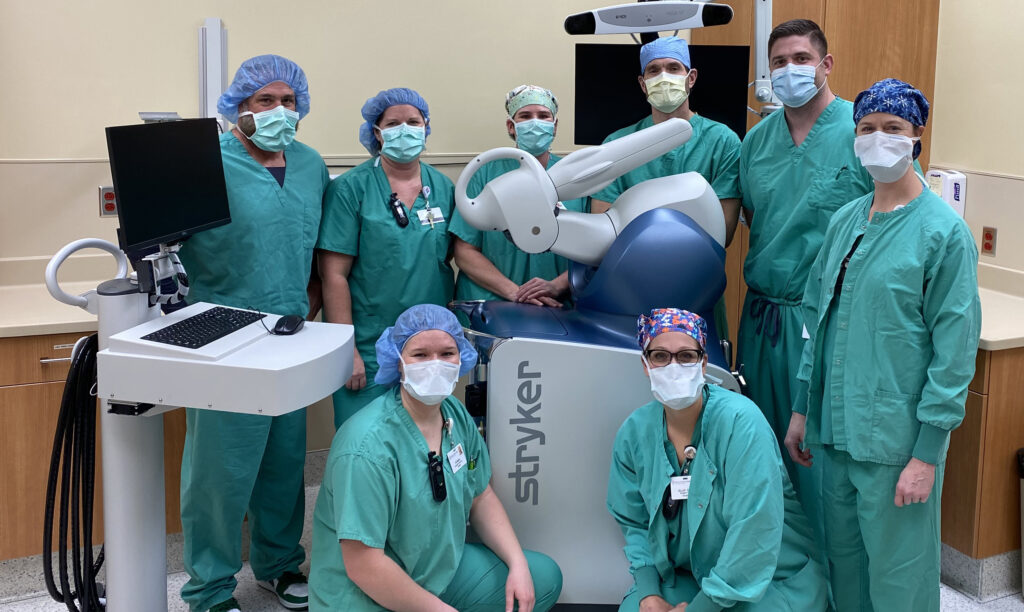 A robotic surgery assistant has come to Sioux Center Health, making it the first Sioux County hospital to implement such technology.

A Stryker brand Mako robotic arm arrived at the Sioux Center Health about three weeks ago and orthopedic surgeon Dr. Bryce Braaksma plans to utilize it in a knee replacement surgery the second week of January.

“This is incredibly exciting for us,” said Sioux Center Health CEO Cory Nelson, “We strive to be a leader in health care and provide the options to our patients so they don’t have to leave our region. Being able to bring this to the region shows that commitment that Sioux Center Health has to the region we’re serving and making sure that highest quality care is available locally.”

“One of our major deciding factors in making this investment in robotic technology was making sure we have the highest capabilities in the field to be able to do the services that keep people locally because we know people like to stay local for their care,” Nelson said.

Braaksma, 35, has completed about 500 such robotic-assisted orthopedic surgeries in his time as a surgeon. He joined Avera’s network of surgeons who can do hip and knee replacements in September 2019 and does surgery twice a month at Sioux Center Health.

He and Dr. Brian Johnson, an additional orthopedic surgeon at Sioux Center Health, are trained in robotic surgery assistance.

“Before, when I gave people the option of traditional surgery or have it done with robotic assistance, there were 10-20 people choosing to go to Sioux Falls to have the surgery done robotically,” he said. “Now, no matter a patient’s choice for how the surgery is done, they can stay in Sioux Center, staying closer to home to have it done.”

Utilizing a robotic assistant doesn’t cut down or extend surgery time, but it does enhance the surgery process.

Braaksma said he starts with a CT scan of the joint, which is used to create a 3D virtual model that’s uploaded to the software to create a personalized preoperative plan with correct implant sizes and accurate cuts.

“In the operating room, I can use the Mako system to double check my plan and use the robot to make adjustments to the plan during surgery, as needed, based on intraoperative feedback of each patient’s soft tissue balancing,” he said. “The robotic arm makes cuts more accurately. It also acts as a fail-safe by protecting the nerve and artery in the back of the knee as well as the stabilizing ligaments in the knee.

“Basically, if I try to push the saw outside of the boundaries into a dangerous area, it won’t allow me do to that.”

Seeing other surgeons utilize the technology encouraged Braaksma to do the same.

“With any new tool or technological there’s a challenge with learning how to use it,” he said. “When I first started using it in my residency program, I wasn’t a big fan initially because it slowed things down. However, during my fellowship, I saw all these surgeons, no matter what stage they were in their career, change their practice to using robotics. It wasn’t because it made them faster or for marketing purposes, they switched because they thought it had a better outcome for their patients. That’s what made me buy into it too.”

Because robotics allows Braaksma and fellow surgeons to more accurately recreate a stable knee or hip joint, he can preserve the surrounding soft tissues in a minimally invasive manor.

“Don’t always have to cut the muscles, ligaments and tendons, that allows patients to have a recovery with much less pain and leave the hospital the day of or day after surgery,” he said. “It’s a great honor to be able to help patients recover more rapidly. I want patients to get back to their regular lives, get back to doing things they haven’t done in years or maybe even decades and hopefully painlessly.”

Braaksma compares the surgery option to hanging pictures on a wall.

“If you hang them free hand, someone may come in and say a picture or two is off a few degrees,” he said. “If you use a level, it’s going to look straight. So total knee, partial knee and hip replacements can still be done manually and most will come out good, but why not use the tool that helps make the job more precise?”

Good tools can help the outcomes be better also, he said.

“Most people are afraid to have surgery,” Braaksma said. “They’re afraid of a slow recovery, afraid of pain, afraid of being dependent on others. I think having this robot in Sioux Center can really be an asset to help minimize that fear.”

Purchasing the robotic surgery assistant is a seven-year investment for the hospital.

“We’ve been thinking about this purchase for the past couple of years and, knowing its benefits, wanted to have a few surgeons on staff who would be able to use it,” Nelson said. “With that in place and knowing we want to provide the highest quality care for our region, we felt this was a worthwhile investment.”