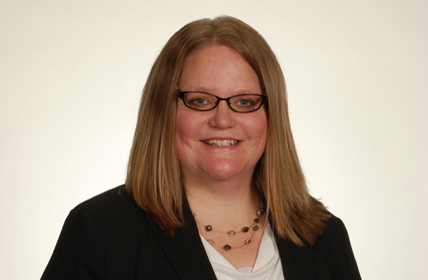 April’s career in health care has been a journey that has taken her down several paths.  Through the journey, she has learned different aspects of the health care industry which has helped her progress into her role as Clinic Services Officer at Sioux Center Health.

She started college at Minnesota State University Moorhead majoring in psychology with the intent of becoming a counselor.  After graduating in 2001, she worked at Prairie St. John’s, a psychiatric hospital in Fargo, ND.  April was a Behavioral Health Technician on the inpatient children’s floor.  This was both a very rewarding and challenging job.  She enjoyed working with the children and helping them set goals to achieve a happier and healthier life.

In 2006, she decided to move back to her hometown area and took a position as Executive Assistant/Office Manager for Catholic Health Initiatives in Valley City, ND.  In this position, she supported three hospital executives with oversight of four hospitals in the region.  April worked closely with the management teams from all four hospitals.

The Valley City CHI office was merged with the Minneapolis CHI office and relocated to Fargo in 2008.  She enjoyed living closer to her family so decided to stay in the area rather than move to Fargo.  She was offered positions with all four hospitals that she had worked with and chose to take a Human Resources Assistant position at Oakes Community Hospital.  She assisted with processing payroll, running reports and helping with the transition to an online benefit/financial system.  The Executive Assistant position opened up so she moved into that role where she was in charge of medical staff credentialing, executive meetings, Board meetings, ER provider scheduling and locum provider communication.

In 2009, the hospital made the decision to recruit employed providers and open a clinic within the hospital.  April played an integral role in provider recruitment, staffing, developing and marketing the new clinic.  A few months after opening she was promoted to Clinic Manager.  As manager she was responsible for the overall operations of the clinic: budgeting, monitoring staff and patient satisfaction, communication within her department as well as communication with other hospital departments, process improvement planning and quality initiatives.  April was later tasked to oversee operations of the sister hospital’s clinic in Lisbon, ND.

Spring of 2016, She made a personal decision to move to Iowa to live with her fiancé, Mark Zalme.  April joined Promise Community Health Center as their Billing Specialist.  As Billing Specialist, she learned the ins and outs of Iowa’s healthcare exchange, Managed Care Organizations, and various billing processes.

April lives in Sioux Center with her fiancé, Mark.  They have two children, JT (11) and Wrigley (7 months).