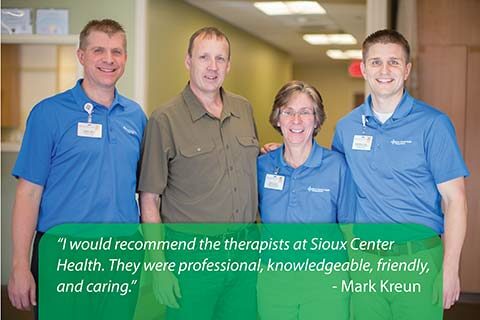 On Friday, July 29 I was airlifted from Sioux Center to Avera McKennon in Sioux Falls. At the time the diagnosis was uncertain but was later determined to be an acute case of West Nile Virus. I was in McKennon until August 16. Because of the encephalitis from West Nile, my cognitive ability and balance were impacted. While in the hospital, I received physical and speech therapy.

On Friday, July 29 I was airlifted from Sioux Center to Avera McKennon in Sioux Falls. At the time the diagnosis was uncertain but was later determined to be an acute case of West Nile Virus. I was in McKennon until August 16. Because of the encephalitis from West Nile, my cognitive ability and balance were impacted. While in the hospital, I received physical and speech therapy.

Before being discharged, Julie, my wife, was given the option of having my rehab done in Sioux Falls or getting the therapy closer to home. She didn’t want to compromise the quality of the therapy I was going to receive even if it meant being inconvenienced by having to drive to Sioux Falls three days a week. Julie did research by asking people who were familiar with the therapists at the Sioux Center hospital as well as other local options, and she selected Sioux Center Health as they were given high marks. She was assured by the neurologist in Sioux Falls that if we didn’t feel comfortable after starting with Sioux Center Health, we could always switch to Sioux Falls. Upon my first appointment in Sioux Center, we both felt comfortable with the therapists assigned to my care.

My speech therapist, Patricia Halse, was committed to tailoring therapy to match the skills I would need upon my return to work as a bank market president. She created specific executive thinking exercises for me as well as referring me to online recourses that I could do at home. The physical therapist I was assigned to was Jerry Zomermaand.  He was attentive, affirming, and encouraging and I was getting physically and mentally stronger. However, about three weeks into the out-patient therapy, I started to feel weak and it kept getting worse. Jerry, physical therapist, was very concerned about this sudden change and was an advocate by contacting my family physician as well as communicating with the neurologists in Sioux Falls who were familiar with my case. Without his intervention, I don’t believe I would have received an appointment with my neurologist very quickly. We waited two days to be seen and upon my examination in Sioux Falls on September 9, I was diagnosed with Guillain-Barre’ syndrome (GBS) which is a debilitating weakness and I was immediately admitted to the hospital.

I was treated for five days with IVIG treatments and then spent the next 15 days in physical and occupational therapy at the hospital in Sioux Falls. Upon discharge, I was very weak and had limited mobility so out-patient therapy was necessary again. This time, the therapy needed was occupational and physical. We met with Andrew Geleynse, our occupational therapist and he was amazing. He went as far as to come to my place of employment in Hull to check out my work environment to offer suggestions on tailor my work space. I was challenged by my therapists to do at home exercises, and track my progress, and I’ve seen very good results. In fact, the end of November I went to Mayo for a review of my case and the doctor stated he was very pleased with my recovery after two very serious diseases.

We would recommend the therapists at Sioux Center Health. They were professional, knowledgeable, friendly, and caring. But they also challenged me to work hard at home and while I was there.  The office staff was also excellent and very accommodating with working with our schedule. We’re very pleased with the overall care we received at Sioux Center Health. 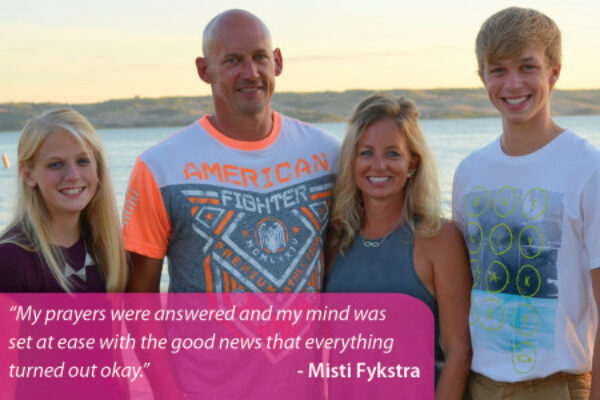 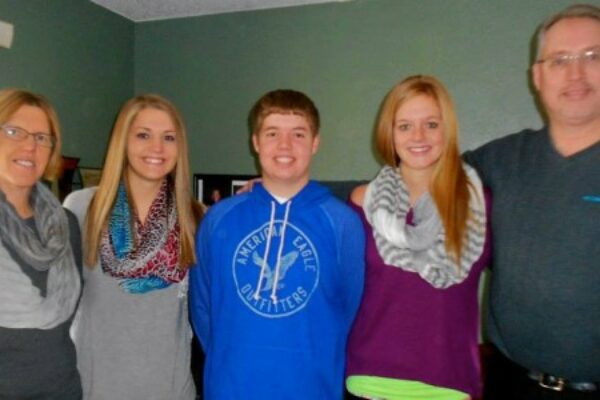