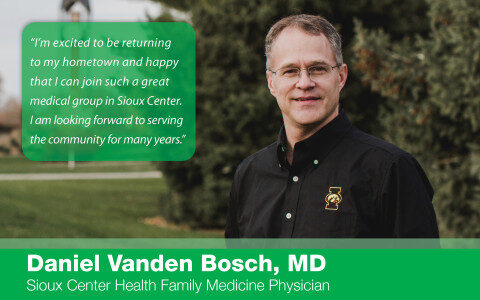 A Sioux Center native is returning to his roots to practice family medicine.

Vanden Bosch, 51, is 1984 graduate of Western Christian High School. He received his chemistry degree from Dordt College in 1988 and his medical degree from the University of Iowa College of Medicine in 1992.

After completing his Family Medicine Residency at the Cedar Rapids Medical Education Foundation in 1995, he began his full-time practice at UnityPoint Health in Cedar Rapids, where he practices Monday-Thursday during the week through the end of December.

Vanden Bosch has done some shifts in the Sioux Center Health emergency room this fall to get used to hospital and electronic charts.

“One of the draws of coming back here is that I’ve been friends since early grade school with [Dr. Scott Rens],” Vanden Bosch said. “Were classmates from second grade through medical school. We got each other through Dordt and med school, studying together. It’s a comfort in coming back.”

Vanden Bosch made the decision to attend medical school back in high school.

“I honestly can’t remember exactly why,” he said. “I liked the sciences. My older brother was pre-med; nobody else was medical in our family. I just thought it sounded like something good to do.”

“I’ve enjoyed taking care of the whole family, helping everyone from babies to those in nursing homes,” he said. “There have been several families I’ve seen three or four generations of; that’s really fun.”

The opportunity to return to Sioux Center came up just two years ago.

“I really enjoyed where I was; I can’t say it was on our radar to return to Sioux Center until two years ago,” Vanden Bosch said.

At that time, his wife Sandy — a full-time CPA for nearly three decades — was encouraged to apply to be a business professor at Dordt.

“While my parents are in the area, we really hadn’t thought about coming back to live here,” Vanden Bosch said. “My wife, having been in the business world up until then, was at the point in her career she was ready for a change so we cautiously pursued it to see if God was opening these doors. We weren’t sure we wanted these doors to open, but they kept opening and timing was right.”

After being an adjunct faculty member last year, Sandy Vanden Bosch began as a full-time business professor this fall. The couple moved to Sioux Center in August.

“When God opens doors, it’s a little daunting to see where they lead but also exciting,” Vanden Bosch said.

Working some ER rotations has already helped him reconnect with the community.

“When you’re coming to back to a small town, it’s easy to find the connections,” he said.

Vanden Bosch and his wife have two daughters. Kristin is in her last year of medical school working to become a pediatrician. She lives in North Carolina with her husband Cam Stuive. Kasey is a senior at Dordt.

Vanden Bosch’s hobbies including reading, family activities and a hope to start golfing more. Four years ago he also started refereeing junior high and high school volleyball, which he also would like to continue doing locally.

“It’s going to be fun to really get started,” Vanden Bosch said about January. “I have never not been busy. When I started as a doctor in 1995, I took over a practice for a doctor who was retiring so I’ve been busy from day one. I’ve never had a slow period and I hope to keep the momentum going here as well.” 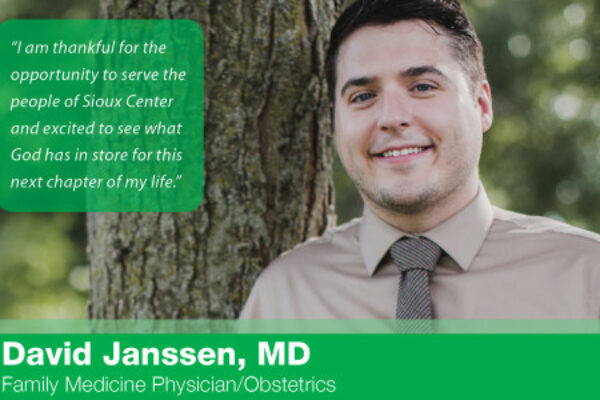 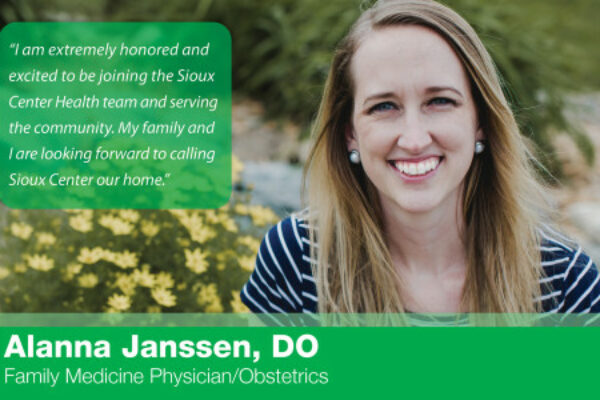